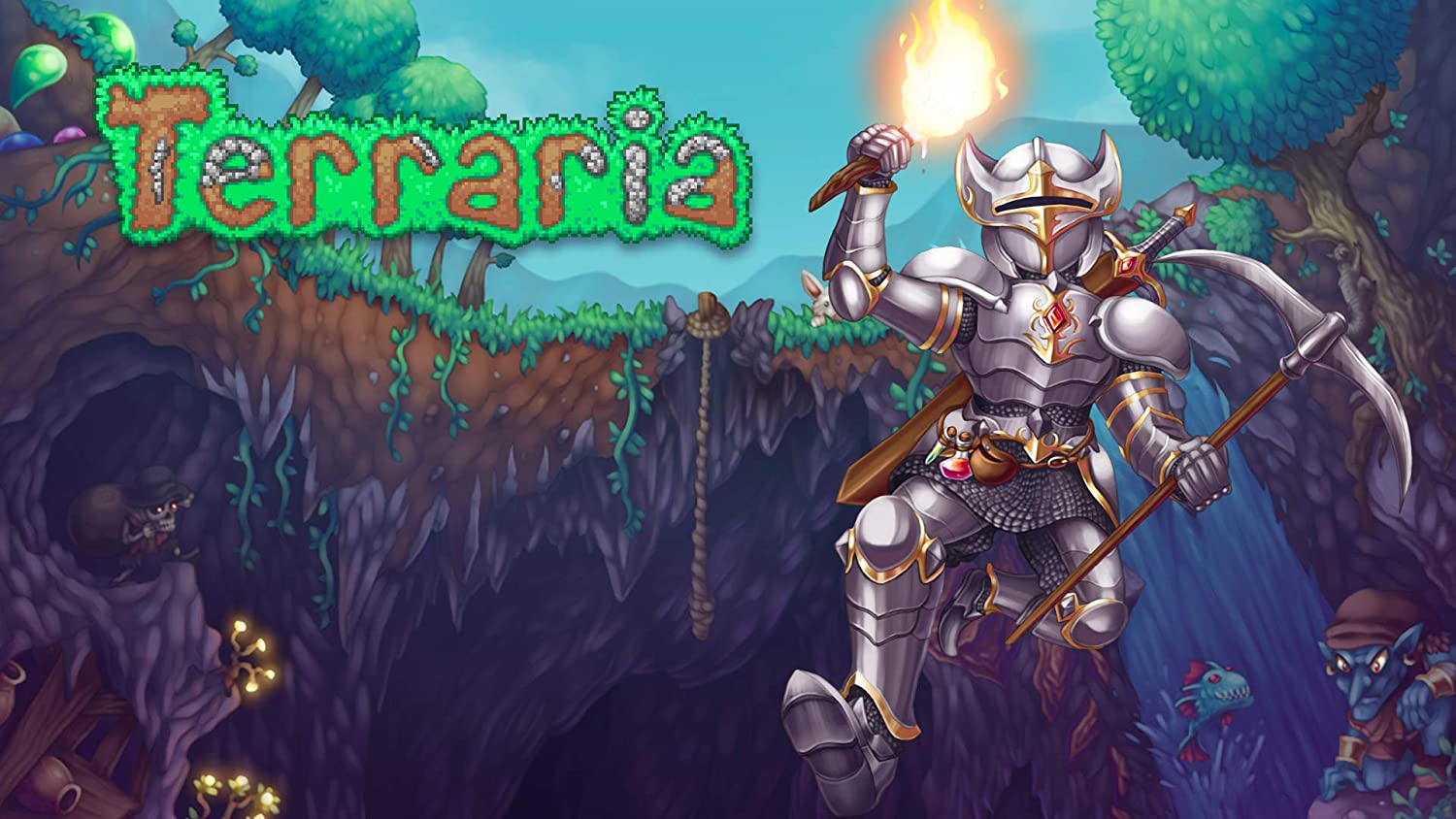 "The ancient spirits of light and dark have been released." If you’re a Terraria player – know there are a lot of choices that you can make in-game. But, there are also a lot of decisions you can make about your actual gameplay environment.

Whether console or PC, the environment you play the game in really all depends on your play style, level of customization you’re seeking, and whether you want to play with multiple people (multi-player).

Initially released for Microsoft Windows in 2011, Terraria is an action-adventure sandbox-style game developed by Re-Logic – an independent developer based in Indiana. Terraria features exploration, crafting, building, and combat with a variety of creatures in a procedurally generated 2D world. At launch, the game received generally positive critical reception and praise given to its sandbox elements. By May 2019, the game had sold over 27 million copies across all platforms. It also includes thousands of blocks and mobs during updates rather than just a couple of each, not to mention it’s easier to mod.

The game is noted for its classic exploration-adventure style of gameplay, similar to games such as the Metroid series and Minecraft.

How Does Game Play Work?

The player starts out with three basic tools: a pickaxe for digging, a sword for combat, and an ax for woodcutting. The player begins with 100 health and 20 mana points, which can both be increased by finding certain items. The player uses resources to craft new items and equipment at an appropriate crafting station for that recipe. For example, tables or other items can be crafted at a workbench, bars can be smelted from ore at a furnace and armor can be crafted at an anvil.

The player can encounter many different enemies in Terraria, such as simple slime blobs, zombies, skeletons, demon eyes, and various biome-specific enemies. Players fight against enemies with swords, bows, guns, magic spells and summoned attackers. The player may also battle bosses with a number of different combat mechanics that can drop rare items and large amounts of in-game currency. The defeat of these bosses is directly tied to in-game progression.

By completing specific goals, such as defeating a boss or obtaining a certain item, players can attract non-player characters (NPCs) to occupy structures or rooms they have built, such as a merchant, nurse, or wizard. Players may then buy or sell items and certain services from NPCs with coins found in the world.

The game recognizes many different biomes and areas, defined by the blocks that exist in the vicinity - each home to a unique set of enemies. If the player journeys to the Underworld biome and summons and defeats a boss called the Wall of Flesh, the game enters "hard mode", which adds many new and much stronger enemies throughout the world, as well as new NPCs, bosses, ores, items and a new biome called The Hallow.

The game also features an "expert" difficulty, which can be enabled when creating a world. Expert mode increases the difficulty of the game by increasing the attack and health of monsters and bosses, further increasing the strength of weaker enemies after hard mode, giving some bosses new attack patterns, decreasing the effectiveness of life regeneration, and other tweaks.

How to Choose: Client-Side Versus Dedicated Terraria Server

Terraria is available for both PC, console and mobile game formats. The console versions of Terraria (one Xbox One, PS4, Switch, etc.) were actually not created by Re-Logic but ported by a third-party developer Pipeworks. The mobile version also has a different framework for multi-player as in-game you choose “multiplayer” and then press on your preferred character. Then, your mobile device will search for a local host or if you chose online – it’ll just wait until it finds a player. There are also other third-party tools for mobile that would allow you to forward the game over to a single network but they’re not supported.

When you first gain access to the game – on PC and probably via Steam – you get access to the Terraria Server Client. As a gamer, you can choose to host a dedicated server using the TerrariaServer.exe file it provides you - or just use the standard “Host & Join” feature of the game and get started. But, which option do you choose?

By running a client-side game, you can get started immediately. You open the Terraria application, choose “Host & Play,” choose options and start the world – and you become the host. Then, other gamers can join you across your LAN or via the internet – or you can have friends Join from Steam. When you – the host – leave the game – the world shuts down.

Now, there are both pros and cons to this. It. Does simplify your ability to get started in the game – but the key point here is that you – yes you become the host. And while you may have a lightning-fast cable modem or better – your gameplay will most likely lag as your PC is serving as the host. Now, if you’re hosting a LAN, then something like this may make sense for your gameplay. But, if you love the game and want to ensure no lag – this may not be the way to go.

Almost all agree that Terraria best experienced with a group of friends. If you really are looking for something easy, then choosing the client-server option may be the way to go – however, if customization, speed, longer games, and less lag are important to you – you may want to pursue a dedicated server. As mentioned before, when you first access the files for the game you are provided both the server-client as well as the Terraria Server installation files. There are public servers available like those offered from Aurora Gaming, Pedguin and Teeria Legends – but you can also create your own dedicated server with your friends.

Using the dedicated server option allows you to run the game on a separate host from your own PC which allows for no graphics requirements and no requirement for the “host” to stay connected. Also, running a dedicated server makes mods easier and provides less lag if you’re attempting to load mods with the tModLoader. So for those that love the Calamity, Super Terraria World, Thorium, Pokemod, Enigma, etc. mods, a dedicated server may be the best option.

We at AleForge are gamers. And as gamers, we always prefer the faster and more customizable experience – that’s why we created AleForge.

A Terraria server gives a platform to players to connect over the internet and better serve multi-player game environments. A server can be joined by choosing the Multiplayer option on the main menu, selecting a character, and then entering the server’s IP and port. It’s fairly simple and honestly – and with AleForge – setting up a new server takes less than 60 seconds.

With Aleforge, you don’t need to worry about lagging servers or uptime thanks to our advanced platform. We provider better hardware and better uptime than the “Host & Play” option – which leads to a better game experience for you, your players, and allows for more mods.